First, some (almost useless) background: I managed to install NomadBSD on a USB key and I use it at work. I am teacher and the computers in the classrooms all run Windows. I could start and use NomadBSD on several of them (different classrooms, different configurations, 3 with different multiscreen config, all ran fine). I am pretty happy I did not have to advertise for Microsoft during my lessons in the last few weeks. I wanted to try this since a long time and thought a Linux distro (namely Slax) would make it, but finally no, NomadBSD made it before

Only problem, today I wanted to run a video and could not get any sound. I checked the cables, the speakers were on, I changed the volume etc. everything looked absolutely fine. I gave an exercise to the children while I was rapidly checking was I could, but I had not much time, so here are the informations I could gather (I did not copy the commands unfortunately):

I have checked the volume was high enough, changed the default device as described in the handbooklet, have restarted Firefox, also tried from vlc and the other video player.

I wonder what “No devices installed from userspace.” means: is it normal?

Unfortunately I will be able to retry only once, friday, and then not before september. If I cannot resolve this, I’ll have to restart with Windows

So I’ll gather any clue and hints and cross my fingers.

Many thanks for any help to investigate this further!

Thank you! I’ll try this and tell if it worked! 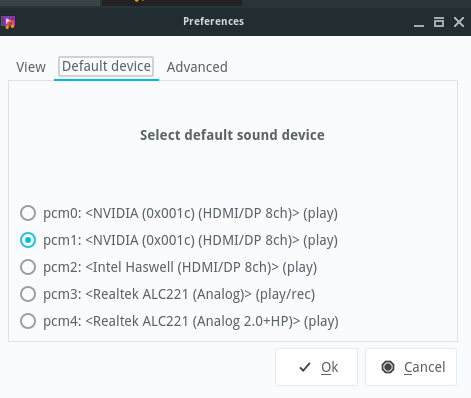 Iḿ new to NomadBSD, looks very slick, seems to work well but no sound.
I checked the handbook and tried all the options open to me. Iǘe tried plugging the speaker cable into both the front and back of the PC.
Machine does have a Nvidea NVS310 card and the monitor is connected with a display port.
I can get sound out from the computer itself but not the speakers.

could you please post the output of dmesg | egrep 'pcm|snd|hdac'?

Could please try to play some sound through your HDMI/DP which is connected to the monitor with speakers (cat /dev/random > /dev/dsp) and repeat the command dmesg | egrep 'pcm|snd|hdac' to see if there are any error messages?

Hi,
Sorry bit of confusion from my side of things. The monitor connected by DP doesn’t have any built in speakers. I have external speakers on a 3.5mm connector plugged into the computer itself

Sorry bit of confusion from my side of things. The monitor connected by DP doesn’t have any built in speakers. I have external speakers on a 3.5mm connector plugged into the computer itself

I can get sound out from the computer itself but not the speakers.

, what does that mean? Does your PC have integrated speakers like a laptop?

Hi,
there’s some sort of crappy teeny speaker within the computer itself, it’s an HP EliteDesk machine, so yeah, kinda like a laptop but worse sound
thanks

Ok. Your default audio device should then be set to pcm3 (Realtek ALC221 (Analog)). The reason why there is no audio coming from the front or back rear is very likely an audio routing problem. See this thread which should solve your problem. In your case it’s hint.hdac.2.*.

Thanks mk1,
I’ve got sound!
I kind of tried to follow their lead on the FreeBSD forum you suggested and just about managed to figure out that it was routing sound (sndstat) via the graphics card and cable to the monitor, a quick scratch around and i see there is a speaker outlet cable on the monitor, plug it in and bingo.
Thats good enough for me, thanks for the help/patience, no doubt iĺl be back with more questions later!
gbar

I’ve got sound!
I kind of tried to follow their lead on the FreeBSD forum you suggested and just about managed to figure out that it was routing sound (sndstat) via the graphics card and cable to the monitor, a quick scratch around and i see there is a speaker outlet cable on the monitor, plug it in and bingo.

no doubt iĺl be back with more questions later!

Sorry to come back late at this, but I thought there was no emergency since I won’t be able to test again before september at least. So, the suggestion unfortunately did not work.

I have performed some more tests on a computer that’s not in a classroom, so I had more time for this. The sound configuration looks the same and the problems are the same (no sound, but sound works from Windows).

The sound drivers were loaded:

So I’ve tried the suggested command, but it looks like it didn’t change anything:

I have copied the whole dmesg, so I could run the egrep 'pcm|snd|hdac' command on it too:

I did some other unsuccessful attempts, but I’m not sure they’re relevant at all. I can post them too, as well as the complete dmesg output, if this could be of interest.

Don’t know what I should try next. When I’ll be able to test this again, I’ll certainly have to read the suggested topic from FreeBSD forums and hence the man page for snd_hda, if I’m not wrong. I’ll give feedback again when testing is possible again.

Hi,
I’m back after a break and the computer sound has stopped working!
DSB Mixer has stopped working, it opens but i can change anything and then some seconds after trying to close it -
he window ¨ The window “DSB Mixer” does not seem to be responding. Do you want to force it to exit by sending the terminate signal?"
I can drag a youtube link and drop it into mpv Media Player and the sound starts coming out of the crappy internal speaker again? I can now open DSB Mixer and itś behaving randomly. There are boxes below Spkr, Line, Mic and Mix and ‘ticks’ are jumping about between them randomly

please open a new thread for your problem.

Thank to this reply i solved my troubles with sound. Thanks