NomadBSD 1.4 up and running fine on a new Chromebox - CN62

Inspired by getting an earlier model - the Asus CN60 - up and running fine, I decided to save a later new-old-stock model, the CN62 from the shredder since it was facing an EOL in 2 months anyway.

Problem is, I didn’t realize I had picked up the locked-down “Chromebox For Meetings G015” model. Gulp - good news, I got past it easily. 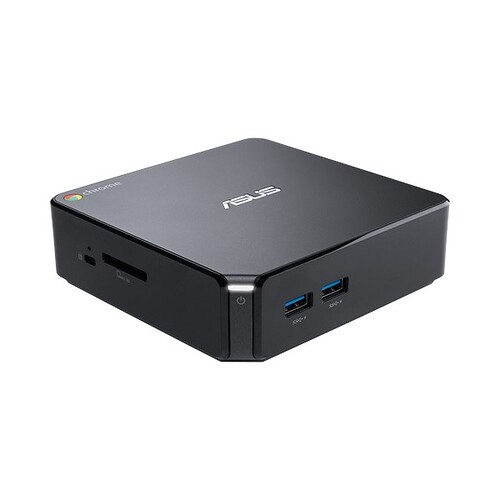 ASUS Chromebox for meetings is a Full HD video conferencing solution that includes an ASUS Chromebox powered by a 5th-Generation Intel® Core™ i7 processor with integrated HD Graphics 5500. In addition, it features a Full HD 1080p video camera, a...

Look how happy everyone is! That’s how I looked when I got NomadBSD running on it!

This model improves upon the earlier one, by allowing the keyboard to function early enough to allow for bootloader kernel options, rather than just waiting for a timeout and crossing fingers. Luckily, the NomadBSD defaults work just fine, but finally good to have a working keyboard choice when booting.

In addition, the dumb little bluetooth remote-control / keyboard works just fine with the included usb dongle! Not that I’m going to use it, but it’s funny to type into LeafPad with it. Not interested, so into the drawer that goes.

As before, HDMI audio was picked up ok, but not the earphone-jack. Some manual configuration on my part should fix that, but in the meantime I slack it with a usb<>audio headphone dongle.

Notes:
The objective is to simply place the unit into “developer mode”, and boot either externally or internally with NomadBSD. No Chromeos chroot environment desired, NOR was any 3rd party bios updates desired either. As a dedicated slacker, I didn’t even want to open the box!

Very simply, I followed the instruction for the earlier CN60 model here - although obviously the hardware description compared to the CN62 are different:

Because the unit was locked down for setting up a Chromebox for Meetings environment, and not the usual consumer one where you bring up a crosh terminal, acess the shell, and do your crossystem commands with sudo - forget that jazz:

Just enter a virtual terminal with CTRL-ALT-F2 which drops you down into a root shell. (after being in developer mode first obviously) Now you can enable the usb boot and legacy boot options and reboot.

SD-CARD for initial run / installation:
Even though you may have set the usb and legacy boot options, this unit - like the one before it - can be hit or miss when it comes to actually booting from usb sticks.

But, using a full-sized SD-CARD for boot (CTRL-L) at the developer mode boot screen, had zero problems being recognized.

So my recommendation is to try a freshly-burned SD-Card of the NomadBSD image.

Normally, I like to run from removable media, but in this case, since the ChromeOs partitions on the m2.ssd were of no use to me at this point, I went for the INSTALL option to the SSD. No problems, and yep - it runs pretty fast.

Once again, I’m stoked at how nicely a Chromebox works with NomadBSD, especially this one now that the keyboard is active at bootloader time, and bluetooth just came up with no problems - although I have little use for that.

Here is a more visual approach to how I got into dev mode. Some articles on the net don’t include the important need to hit CTRL-D a second time to finish the transition.

In this case, it is a DELL Chromebox which has an OEM serial number problem, and how users can fix it. This is NOT a problem on the Asus, and there is NO NEED to open the box and remove a write-protect screw!

The hints in this article on getting into dev mode are good for the normal consumer-level Chromebox as well as the Chromebox-for-meetings unit of most other manufacturers too. Unfortunately, I don’t own them all to test.

At step-9, do NOT hit the spacebar, or you’ll undo dev-mode. Instead, use CTRL-L to boot in legacy mode, preferably with an SD-Card flashed with NomadBSD. Using CTRL-L is how you’ll boot from now on.

Updating the Serial Number of the Chromebox or Chromebox for Meetings | Dell...

Now you’ll be rockin’ your ChromeBox with NomadBSD!

While I’m not at all interested in KODI, the community has provided some nice technical information about this series of Chromebox’ which have gone EOL or are about to.

In particular, I KEEP IT SIMPLE with NomadBSD. I do NOT even open the case, nor do I change the bios firmware with mrchromebox and the like. I do just fine without having to go to those extremes.

However there is some interesting tech info here in case you want to look around:

While I’m not personally interested in turning my boxes into TV’s, the info here might come in handy for you tinkerers.