Proposal for additions to the NomadBSD Handbook or HowTo

Here is a proposal for additions to the NomadBSD Handbook or a HowTo. These are related to things that I have become aware of (but not limited to) in connection with my problems getting NomadBSD to work with the correct graphics drivers on my one computer. Without realizing it, I was making assumptions about FreeBSD, that I brought from Linux, that a new user should be expressly warned about and guided through. I don’t have all of the answers, so I have left the text below as raw text, so that it is easier for other people (@vladas @PacoFdezSimon) on the forum to jump in and edit the text until we have a first draft that is acceptable. Personally, I think this text would be of most use by somehow including it directly in a new version of the NomadBSD Handbook, but a howto would be acceptable as well, but not nearly as visible. Here is the the text:

There are some other things that may be needed for your your computer configuration, such as microcode. If you are planning on using the Linux compatibility layer, “linux linux64” need to be added as in the lines above, however I believe it should read “ubuntu ubuntu64” if you plan on using Ubuntu rather than CentOS compatibility…

I did not quite catch the subject: looks like your article is for nVidia driver — and why did you begin with keyboard layout? NomadBSD installed a keyboard correctly for me, I asked for XCompose only.

And what would the purpose of this handbook — is it for users or sysadmins? IMHO, NomadBSD is intended primarily for ordinary desktop users like me. I am using Plank and OpenBox to start apps, and sometimes to correct Display Settings, DSBautostart. I very rarely write via the CLI interface, I am happy with the excellent OctoPkg for binary package management.

Hello. I am closer to globetrotter than to Vladas. However, it is also true that there are places where you can find the precise information to tune NomadBSD, such as the FreeBSD forums, although you have to be patient to find what you are looking for. In this case I mentioned the problem with the keyboard, but before it was difficult for me to find the solution so that the headphone jack would work correctly, because in the initial installation they were not correctly associated in dev.hdaa.0.nid25 (like " as=4 seq=0", instead of “as=1 seq=15”).

I found this information on the FreeBSD forum, NomadBSD base, after many searches and changes in the appropriate files until I found the solution.

I think one advantage of NomadBSD (and FreeBSD) is the ability to access and modify the configuration files to adjust their behavior to your liking.

Don’t forget that you can make your own updates to the NomadBSD handbook via GitHub: 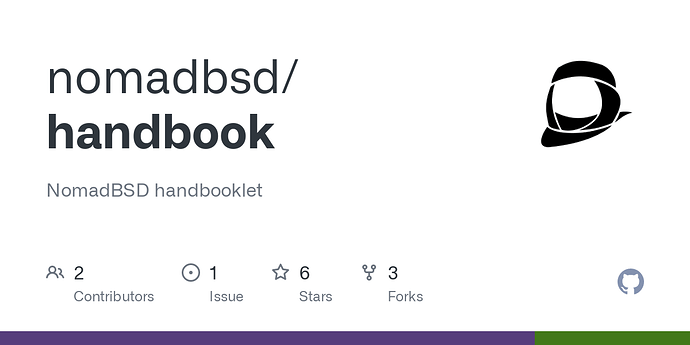 NomadBSD handbooklet. Contribute to nomadbsd/handbook development by creating an account on GitHub.

I am suggesting that there are holes in the documentation and trying to fill some of the holes that I find. While FreeBSD documentation is in general excellent, I find that with the NomadBSD modifications, I am often in doubt as to what has been done and hasn’t been done. Keyboard layout adjustments, installing drivers for hybrid graphics cards, as well as some clearer documentation on the Linux compatibility layer are some of the issues that I have added / would like to add for some more in-depth help and user friendly resources for users, but like you, I am just an average user, which is why it would be nice if there was more dialog between users and developers of NomadBSD…

The Linux compatibility layer instructions in the NomadBSD Handbook have never worked successfully for me. It is an area where there are some modifications that have been done that I have no insight in compared to the FreeBSD documentation, which makes the topic confusing for new users. Despite posting on this forum about it, there has been no response from the developers.

Another problem that I have yet to post about is sound preferences not being saved for the next boot. The first incident was in reference to a persistent USB pen drive, now I am experiencing the same problem on a newly installed computer system (to internal SSD).

Advice for new users installing to a computer system with a hybrid drive setup (SSD + HDD) is also an area that is not obvious to newbies, particularly when the installer is transferring persistent data from a USB pen drive…

That is very useful to know, but typically what I could contribute, as a new user, would be related to my specific experiences, related to specific hardware, or related specifically to modifications that the NomadBSD developers have made that aren’t documented in the NomadBSD Handbook or the FreeBSD documentation, which why I suggest an increased dialog between developers and users, with the purpose of NomadBSD specific documentation and problem solving…

I think my suggestion still stands. Your input would be useful in the Troubleshooting section of the handbook and the user/developer dialog you want is taking place on the developer mailing list, as far as I know: